The Star Wars franchise has cemented its place as the king of pop culture. With a reign spanning four decades, three trilogies, spin-off films, series and a vast expanded universe in all mediums, it’s no surprise that George Lucas’ work is so popular with many generations. To celebrate the stories of a galaxy far, far away, here are great items you can bring to your Sims.

May The Sims Be With You

Star Wars and casual wear go together very well. ChronoDanny has put together a set of t-shirts containing diverse iconic characters and logos, allowing your Sims to show their allegiance while never having to wear the same thing two days in a row! You can download this pack at The Sims Resource. 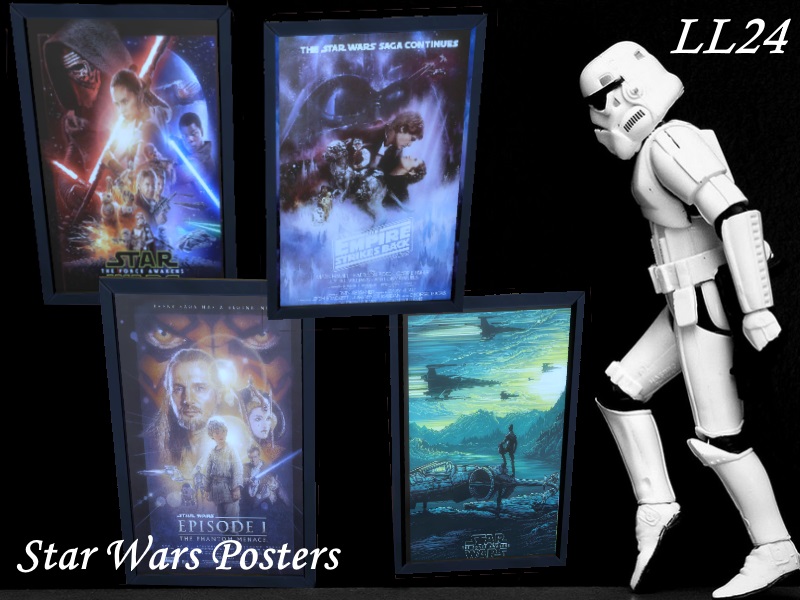 Classics will always be in fashion. This luckylibran24 set of posters is perfect to decorate a fan’s bedroom, with a series of original promotional art for every Star Wars epsiode to date! Download it here!

Two worlds collide: the implacable badass Leia Organa, princess of Alderaan, reproduced as a back tattoo sporting plenty of ink, make-up and a smoking gun! This amazing fusion style was created by Luckylibran24, and can be downloaded at The Sims Resource.

For Sims who relate to the tough scarvenger girl from Jakku, EliteKnight16 has done a fantastic job reproducing Rey’s arm bandages in game. You can use them as accessories to an Earthly outfit, or go all out in replicating her looks! This item is available at ModTheSims.

Funny shirts with Star Wars characters never get old! This pack by Eldoon celebrates iconic scenes like the age-old Han Solo and Greedo shootout, Darth Vader’s paternity announcement and many more. For more serious days, there are also aesthetic motifs with popular characters like the R2-D2 diagram or Boba Fett’s legendary helmet. You can download this at ModTheSims!

Great journeys deserve great openings, so why wouldn’t the same be true for rooms? This C-3PO-themed Star Wars door has a great design, perfect to decorate bedrooms or home cinemas. Download this Alexis Bouvin piece at The Sims Resource!

If The Phantom Menace was divisive at the time, its main villain was not. Darth Maul raised the bar for aggressiveness and evil, and did so while looking the part. Still, it would be a shame if his great outfit was limited to the dark side, so Redline90 and Wully616 brought a great recolour so not all who wear it look like a Sith. Put on this new spin on Jedi garnments by downloading this pack at ModTheSims!

Who never wanted a mural of their favourite series in their room? BeyondTheHorizon and TwistedFoil worked together to create this gorgeous wallpaper with Kylo Ren and First Order Stormtroopers. Download it here!

If you’re partial to the old trilogy, don’t worry! xD0IT and TwistedFoil present this imposing profile of the galaxy’s most feared man, the one and only Darth Vader. Download it here to restore order to the galaxy!

Keeping it simple: girls who love Star Wars will love this design by CelineStilinski, with nothing but the iconic Star Wars logo printed with three different background options. This has been the most recognisable Star Wars shirt style since its first release, and is guaranteed to remain that way for many years to come. Get yours here!

Star Wars fusion tattoos are always great when luvjake and msotattoos are involved. This floral chest piece for men depicts a Stormtrooper and Boba Fett helmets joined by a lightsaber, adorned in beautiful flowers. You can get this gorgeous piece at The Sims Resource.

Bring fandom into the bedroom with this creative set of posters by Jomsims. Not only the posters go into your Sims home, they were also created using Sims version of Star Wars characters! How cool is that? Download this creative piece at The Sims Resource.

Last but certainly not least, while Star Wars is the most popular franchise out there, it’s not the only one, and not everyone is a fan. If you’ve found yourself scrolling through far too many Star Wars costume and would like to avoid that, this mod by Menaceman44 hides them from your selection. You can download it at ModTheSims.

The most Creative Challenges

SNOOTYSIMS covers mod and custom content guides, howto's and everything else you need for your sims. From The Sims 2 to the Sims 4, we’ve got you covered!